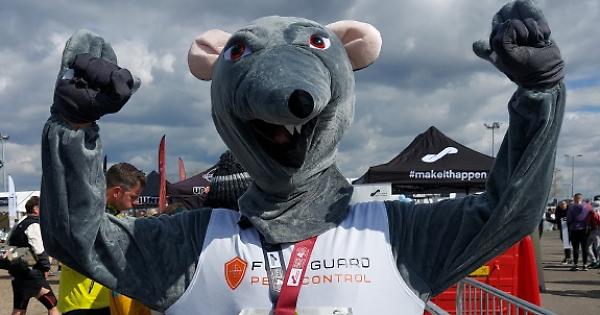 A man runs a half marathon dressed as a rat

A MAN from Sonning Common ran the Reading Half Marathon dressed as a rat.

Paul Hodges, 53, finished in just over two hours and six minutes despite running all the way in a gray fur suit and a giant rodent head.

He said: “I’ve done quite a few races before, but never one in costume. The kids kept shouting “It’s a rat, it’s a rat” when I walked by, which I thought was very funny.

“There was also a woman running around like a squirrel, so there was a bit of a rodent rivalry. I think I beat her, though.

The idea for the costume came when Mr Hodges saw a pest control company in Reading asking someone to run in the outfit.

Michael Sewell, who runs Full Guard, said: “We were looking for a creative way to donate to charity and branch out a bit into the local community. We put the offer online and that’s how we got in touch with Paul.

“We chose a rat because that’s the name of the game. We could have chosen a pigeon, but I thought a rat would be more practical for racing.

Mr Sewell has donated £1,000 of Mr Hodges’ grand total of £1,170, which he is donating to mental health charity Calm.

Mr Hodges, a teacher at John Hampden Grammar School in High Wycombe, said: ‘I discovered Calm and thought I would fundraise for them. It’s a very good charity that does a lot of work for men’s mental health. I ran the Brighton Marathon last year and raised £850 for them. He had to make some adjustments to his costume before the race.

“I had to take the head padding off and wear a bike helmet instead,” Mr Hodges said. “Otherwise it was like wearing a huge tea-cosy. It just made it a little more breathable.

“It was actually a very cold day, so I was relieved to wear the outfit. That was until mile 12, which is when the heat hit me. I thought I I was going to give up, but I didn’t and I’m very proud that I didn’t lead the whole race.

Mr Hodges will now take part in the Bracknell Half Marathon on May 15.

“I love running,” he said. “It helps you sort out a lot of things. You get into the right mental space, work through your issues, and feel good about yourself for the rest of the day. I probably won’t run in an outfit again, though. It was great doing it once but I’ll do something else next time.