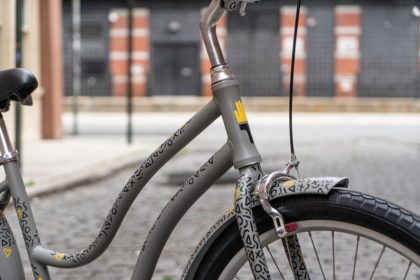 PRIORITY BICYCLES IS ORGANIZING A DRAW
Priority Bicycles has commissioned four artists – Dirty Bandits, Jason Naylor, Vexta and Jessie Salinas – to each customize a Tribeca company bike and they will be raffling them off this month as a fundraiser for the “You don’t you’re not alone’ to fight mental health. All money raised will be donated to NAMI-NYC, which provides free services to help families and individuals affected by mental illness. The draw runs until June 17 and winners are drawn on June 23. Enter the draw here.

SURVEY FOR NEW METRO MAPS
The new subway pilot cards scare me – hope they’re not permanent. They remind me a lot of those designed by Massimo Vignelli — which I only saw in his obituary in 2014. (I thought it would be cool to collect one – you can buy one at the Transit Museum – but not to convert the whole system!) The guy was a genius, of course, and the design was praised by the art critics, less by straphangers. Turns out there’s a MTA poll if you want to weigh. There’s one at the Fulton hub to see it in person.

AND WHILE ON THE PLATFORM…
I spotted this crafty person on the Chambers Street A/C platform at the end of downtown. Good to know in case of a pinch…

MMUSEUMM IS OPEN FOR THE SEASON
The tiny Mmuseumm is open again on Cortlandt Alley, Fridays and Saturdays from 11 a.m. to 6 p.m. or 24/7 via the panoramic windows or by appointment. As they describe it, it’s “A place to watch and think and watch and not think.”

Online safety and social media regulation are gaining momentum on both sides of the Atlantic – are the tech giants ready? | Dechert LLP