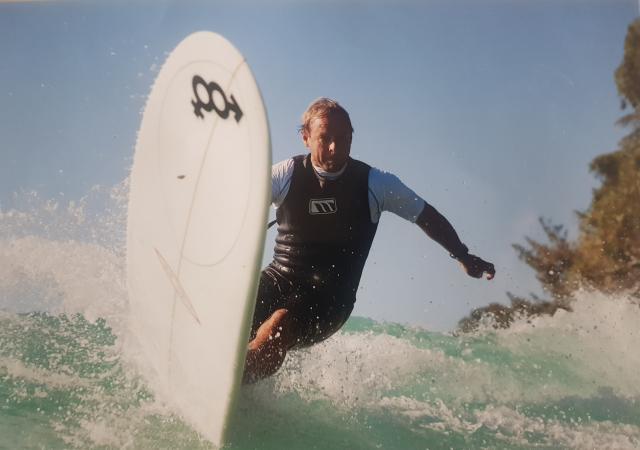 If you’ve been surfing Noosa’s dots for a few decades or more, you’ll have plenty of Geoff Fanning memorabilia in the bank.

Universally known as Fanno, the Coal Coast lad first made his mark locally as a high-performance longboarder and then as a traditionalist, winning or at least honoring the podium at lumberjack events and old evil along the coast, but nowhere was Fanno more on song than when Noosa’s spikes fired.

There’s a famous story about Fanno paddling to First Point for a star-studded finish in one of those distant years when the Noosa Festival of Surfing enjoyed near-perfect waves almost every day.

Fanno took off on his first wave as soon as the horn went off and rode it smoothly from the top of the tip to the beach to the surf club, circled and paddled straight into another. While the judges were still counting the scores for his second excellent run, and with almost half the heat to go, Fanno felt he had done enough and walked onto the beach, dove in and lit a smoke as he watched his competitors try to catch him, which they never did.

Apocryphal or not, this story sums up Geoff Fanning – a brilliant and stylish surfer, a good photographer, a guy with a big mouth but an even bigger heart, and he will never leave you wondering.

Fanno disappeared from Noosa a while ago and reappeared in Agnes Water in recovery mode after a difficult few years battling diabetes and other health issues as well as the old black dog.

Generally, Fanno’s recovery program focuses on self-help by helping others, which he does by helping to establish the Discovery Coast branch of the Disabled Surfers Association of Australia.

Discovery has just become the 20th branch of the Agnes-based DSA and held its first Let’s Go Surfing Day last Sunday, with around 30 volunteers helping eight disabled children catch the first waves of their lives and “put a smile on their faces.” their dial”.

Fanno is also responsible for the DSA’s first-ever Christmas membership campaign, asking friends in the surfing industry to help with incentives for new members.

DSA National Chairman Ian Gay said: “The plan is to push for more people, whether they are participating surfers, volunteers, carers or general supporters, to sign up for our membership at just $20 for the 2022-2023 season.

“All money raised from members is 100% used to ensure that the DSA can continue to do what we do.

“The ultimate goal would be to raise enough money through membership to pay for our national insurance which currently costs around $18,000 a year.”

Fanno’s incentive program is all about hitting the Australian surfing industry and creating prize packs that members have the chance to win at the end of the ride, with three lucky members receiving a prize pack in time for Christmas.

Each bundle will include a surfboard courtesy of Thomas Surfboards, Emery Surfboards and JS Industries of Noosa. Fanno is now on the hunt for minor prizes and vouchers to complete the prize packs ahead of the December 4 draw.

The Disabled Surfers Association was started in 1986 by a surfer named Gary Blaschke after a motorcycle accident in which he lost his kneecap and underwent extensive rehabilitation.

Gary saw a void that needed to be filled because over the years many disabled surfers found they had no one to help them get back in the water.

Gary’s vision of helping surfers who became disabled quickly extended to all categories of disabilities, and to people who had never surfed before but, with help, could derive such joy from it.

DSA now has 20 branches in Australia and one in New Zealand.

Their mission is to

Put Smiles On Dials by taking people of all disabilities to surf in a fun, friendly and safe environment.

The motto of Noosa World Surfing Reserve, inaugurated in February 2020, is Share, Respect, Preserve, which encapsulates NWSR’s goal of preserving our surf areas and their surrounding environments.

Many people contribute to these goals within the local community, and the NWSR Stewardship Board will publicly recognize these wonderful contributions at the NWSR Surfers Ball and Annual Community Awards Night at the Boiling Pot Brewery on Friday, November 18.

In this second year of the awards, outstanding contributions in the following areas will be showcased:

Nominations for the awards are now open and must be received by email by Sunday, October 30. Applications from coaches, clubs and associations are welcome, as well as individuals.

Email the nomination form, photo and other relevant information to [email protected]