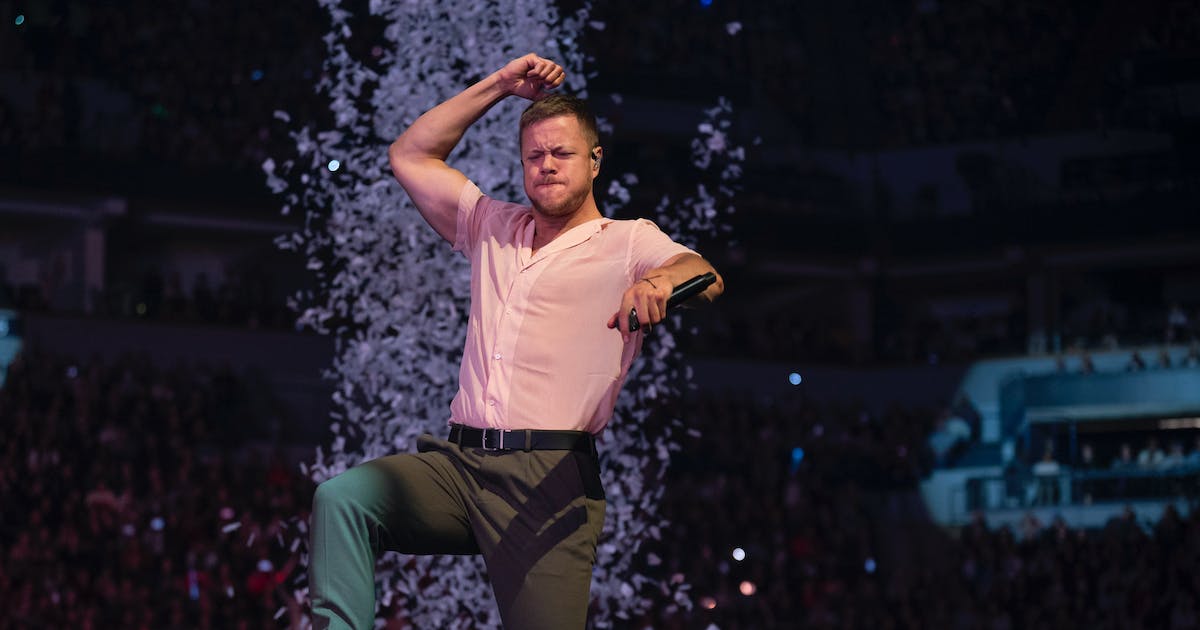 No one was lying on a couch. No one was asked to leave after 50 minutes. But Sunday’s Imagine Dragons concert at the Target Center in Minneapolis turned into a massive therapy session for 14,000 fans and a rock singer.

Dan Reynolds, frontman of the biggest rock band to emerge in the last 10 years, has been open about his physical and mental health issues in his songs and in his social media posts. He turned last year’s “Mercury — Act 1” album into a self-help project, baring his soul and assuring his fans — and himself — that it’s OK not to. not be OK.

In Imagine Dragons’ first Twin Cities performance since 2017, Reynolds opened with the slowly building but still angsty “My Life,” about trying to change but struggling to love yourself. Of course, like so many Imagine Dragons bits, it ended up being explosive drama, complete with confetti and fireworks.

Whether he was philosophizing between songs (“seeing a therapist…it saved my life”) or relying on a deep-voiced narrator to deliver his themes (“facing the world as it is “), Reynolds, 34, was taking care of himself. whatever problems.

But the father-of-four just wanted to reassure his packed house in Minneapolis — the first city where radio adopted Imagine Dragons 10 years ago, he pointed out — that everything will be fine.

Reynolds dedicated “It’s OK” from “Mercury” to all the kids in the crowd — there were a staggering number of them with their parents — reminding them to be yourself, not to give in to what the other kids are saying. from you. “It’s OK to not be OK,” he sang. “It’s good to be out of your mind.”

If the liberating message was well received, the same goes for the fact that for this selection, Imagine Dragons composed it. Most of their songs are stereotypical explosions, with mid-tempo verses and volcanic-song-like choruses, leading to backing vocals and stardom in countries that don’t speak English as their first language. .

This reliance on a sound formula allowed for a long night of mostly booming, bouncy, and explosive bangers, including hits such as the pulverizing “Whatever It Takes”, the pounding “Demons” and the heavy “Enemy”. With the sound pushed to 11, Reynolds might have bellowed louder than Bono, the famous U2 singer. Did anyone have a decibel meter at Target Center?

This brashness and bravado, befitting of Imagine Dragon’s hometown of Las Vegas, was dressed in plenty of glitzy visual effects, including flames, fireworks, lasers and confetti across – count ’em – five songs. different.

These bearded 30-somethings – three of whom have Daniel as their birth name – came across as friendly suburban dads, dressed in the casual shirts and chinos that every football dad probably has in his closet.

Guitarist Wayne Sermon, bassist Ben McKee, and drummer Daniel Platzman met while students at Berklee College of Music in Boston, and they later met Reynolds in Vegas. (A guest keyboardist, Elliot Schwartzman, joins them on tours.)

Midway through Sunday’s two-hour concert, the quintet reunited at the end of the Y-shaped track on a satellite stage for a four-song acoustic segment. “Next to Me” was Reynolds’ most soulful and nuanced vocal. Sermon’s soulful flamenco-flavored guitar solo spiced up the Jason Mraz-evoking “One Day.” “I Bet My Life” turned into a happy Mumford & Sons-esque hootenanny.

But the highlight was the night’s only cover, Bob Marley’s “Three Little Birds,” which Reynolds touted as a stress reliever he could listen to every day because, as the song reassures him, “every little thing will be fine”.

Reynolds’ fresh perspective — seven of Sunday’s 24 songs came from “Mercury” — sounded a different note than Imagine Dragons’ debut hit, 2012’s “It’s Time,” when he declared “I’ll never change who I am. am”.

With this revamped perspective, the singer closed the performance without an encore by covering the chorus of “My Life” with a spoken ad lib. “There are no second chances,” he roared, pounding his open hand over his heart. It’s the Reynolds wrap for a rock therapy session.

Opening the concert was Danish electropop singer Mo, who had clever song titles like “Brad Pitt” and “Last Song” for her finale, but her standout number was “Lean On,” her heart-pounding international hit from 2015 with Major Lazer.

How private investment can contribute to employee well-being