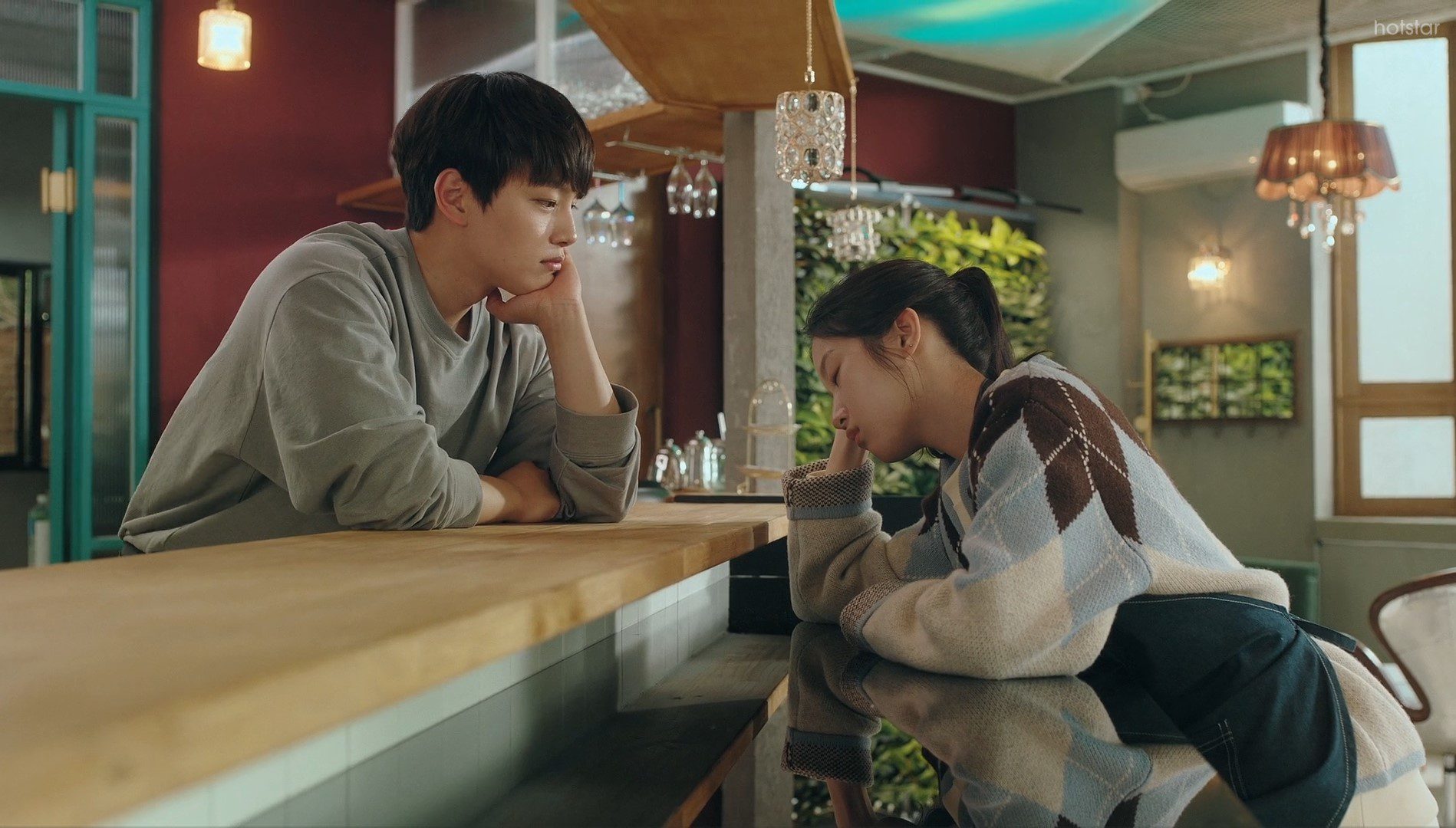 Link: Eat, Love, Kill (링크: 먹고 사랑하라 죽이게) is a fantasy drama series directed by Hong Jong-chan and starring Yeo Jin-goo and Mun Ka-young in the lead roles. The series consists of 16 episodes and will resume on tvN’s Monday and Tuesday slot at 10:30 p.m. KST, previously occupied by Doberman Military Prosecutor. The series will air from June 06, 2022 to July 26, 2022. eat love kill episode 7 lasts 63 minutes and is titled thrust.

Disney+ describes the series as follows:

WHEN EUN GYE-HOON RETURNS TO A HOME TOWN, HE FINDS HIMSELF EXPERIENCING STRANGE EMOTIONS AND REALIZES HE SHARES A CONNECTION WITH A WOMAN WHO LIVES THERE

Link: Eat, Love, Kill Episode 7 begins on a rather gloomy note, with Gye-hoon and his mother attending some sort of religious sermon for self-help and his mother crying in the crowd. We see him getting bullied and shunned by everyone around him to the point where he stops getting close to anyone…until he meets Da-hyun.

Back in the latest episode, Gye-hoon desperately searches the streets for Da-hyun, who comes face to face with Jin-geun. He keeps talking about how couples argue sometimes and Da-hyun denies ever dating him. An angry Jin-geun begins to become increasingly unsettled and asks him to apologize.

She refuses and goes on to say that she should have killed him when she had the chance. He asks her to remember when they first met – when she can’t, he tells her that they had met in that alley when they were young.

Anyway, Gye-hoon catches up to them just when things are spiraling out of control and after making sure Da-hyun is okay, he confronts Jin-geun and asks him why he’s harassing her. Jin-geun is about to hit him with a metal rod but stops when he sees a security camera. However, it is clear that the animosity has sown its seeds and that things will heat up in the next episodes!

Gye-hoon then gives Da-hyun a piece of his mind for going out alone and disconnecting the call without telling her where she was – he was “wandering from one alley to another like a headless chicken, terrified” . After his rant ends, Da-hyun simply asks him why he searched for her so hard – is it also because of humanism?

After they return home, his family thanks him for helping Da-hyun and they promise to help each other until they come up with a good plan again Jin-geun. Things seem pretty hopeful, but when they’re on their own, everyone wonders if getting rid of the problem would have been easier than that.

Surprisingly, Jin-geun enlists Min-cheol’s help in overthrowing Gye-hoon after blackmailing him for overthrowing him and attempting to bury him alive. Without much choice, Min-cheol tries to lead him off but luckily Gye-hoon is unharmed and gets away just in time. Unfortunately for Da-hyun, Min-cheol ran into their store and completely destroyed the exterior.

Afterwards, Gye-hoon and Da-hyun are shocked when Eun-jung texts them for a few days off thanks to his brother’s reappearance. In fact, they look rather surprised. That night, Bok-hee and Chun-ok are shocked when Jin-geun comes to their restaurant and invites him to eat.

Bok-hee asks Jin-geun to stop harassing his daughter. However, he’s quite nonchalant about him waking up in a fridge and the threats swirl around the room as if they’re talking about what to eat for lunch.

After an all-out war nearly breaks out, Gye-hoon joins them and asks him why he tried to crush him. Jin-geun agrees that they should all go to jail together, then Gye-hoon asks him to never show his face again or else he’ll make sure to get rid of him.

Read also : Cafe Minamdang Episode 1 Preview: When, Where and How to Watch!

The two men then find themselves outside, Jin-geun asks him his name and seems a little surprised to hear it. Either way, he asks Gye-hoon not to take himself too seriously and then leaves looking like the stalker he is. Meanwhile, Da-hyun thinks about Jin-geun’s comment from the other night.

That night, the perpetually sleepless Da-hyun and Gye-hoon bond over new dishes and vegetable cuts and she learns about his past and why he started cooking. As Da-hyun falls asleep after a night of preparation and conversation, Gye-hoon looks at her like she’s the most interesting book he’s ever read.

Min-cheol and Gye-hoon have a conversation later where he promises never to do what he did but Gye-hoon’s response angers him. Meanwhile, Jin-geun breaks CCTV cameras all over Da-hyun’s neighborhood, shocking Da-hyun the next morning. She wonders if she should turn herself in and seek help from the police.

She is surprised on the road by Min-cheol returning from the train station, who tells her about his conversation with Gye-hoon. Her shocked feelings drive Gye-hoon to find her. However, she pays him no attention, which worries him. She also worries about him and that night she chooses to break up with him.

He tries to tell her that there is nothing between them but she simply states that humanism or whatever he calls it has to end – that he can’t interfere in her life anymore. That she refuses to live with the lies he tells her and that she will stay until he finds her replacement.

A heartbroken Da-hyun thinks about Gye-hoon’s sweet behavior towards her and laments that it’s only been a few months – getting over him shouldn’t be a problem. However, this thought is interrupted when Jin-geun contacts her.

Things are different this time and she promises to kill him if he threatens her family or friends again and basically tells her to get away. However, he sets his sights on Gye-hoon being the real author of all his miseries while Da-hyun finally gets a call from Eun-jung.

As Eun-jung reaches Gye-hoon’s restaurant, Da-hyun arrives there as well, followed closely by Jin-geun. However, in a surprising turn of events, Eun-jung attacks Jin-geun and it appears that she either successfully stabs him or they stab each other.

What an interesting and crazy episode! Link: Eat, Love, Kill Episode 7 has all the makings of a thrilling run, and it is in large part due to your emotional investment with the characters. I love watching Da-hyun and Gye-hoon’s push-and-pull relationship and so when he looks at it longingly, it’s the cutest thing ever.

I’m also glad that Jin-geun came out of the dark and in front of everyone, because otherwise he looked like a ghost that Da-hyun is creating to take shape from a traumatic past. Speaking of traumatic pasts, it almost feels like Jin-geun murdered Gye-young all those years ago, considering the weird way he keeps smiling whenever the conversation goes to the past. I’m really interested to know if it’s true or not.

Anyway, I think it was a gripping episode and Eun-jung’s weird behavior seals the deal for me!