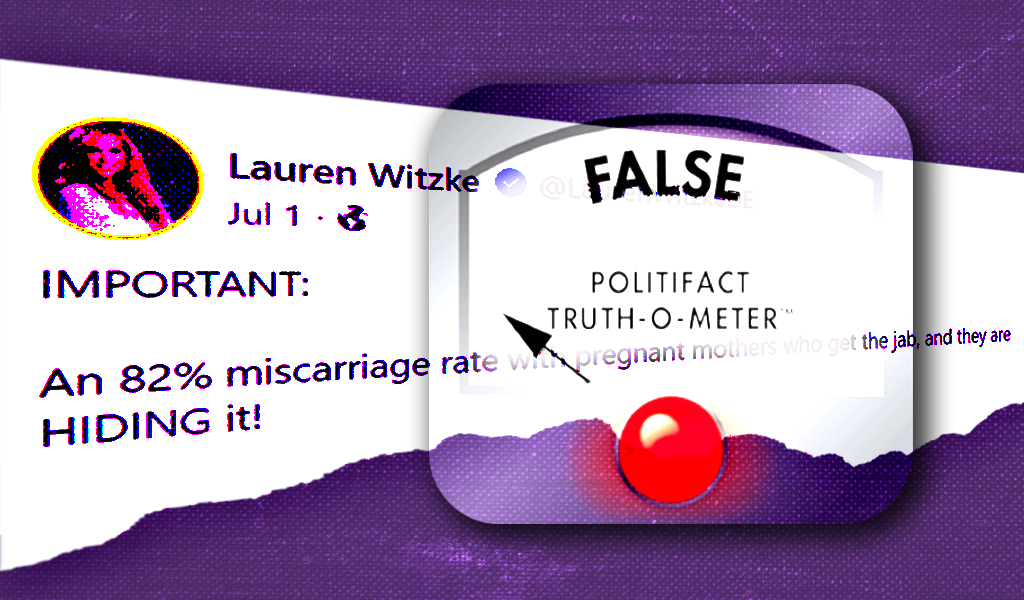 Online forums and right-wing media are circulating false statistics about the alleged impact of the COVID-19 vaccine on pregnant people, manipulating the numbers to advance an incorrect vaccine safety narrative, which preliminary studies show , do not affect pregnancies.

In June, for example, LifeSiteNews – conservative anti-abortion media that was banned on Facebook and YouTube for spreading COVID-19 and vaccine misinformation – deleted an article awaiting “further examination” after falsely reporting that a study published in the New England Journal of Medicine found an “82% miscarriage rate in vaccinated women.” Social media posts discuss the article – without an update regarding its status – even put this number up to 84%. But the two numbers are incorrect interpretations of the study, the preliminary results of which gave no obvious “safety signals” indicating a risk to pregnant women receiving the vaccine.

The NEJM study found a miscarriage rate of only 12.6%; those with the higher numbers did their own math by removing from the denominator those who received the vaccine in the third trimester (when miscarriages are less common). But they ignored the thousands of study participants who were still pregnant or had yet to report. Experts concluded that there is “no evidence of a causal link between COVID-19 inoculation and miscarriage”, and PolitiFact in particular concluded that the figure of 82% was the result of “the selection and manipulation of data from a preliminary study”.

But that hasn’t stopped the right-wing media and right-wing disinformers from circulating these claims.

On the extremist social networking site Gab, former GOP Senate candidate and conspiracy theorist QAnon Lauren Witzke shared an archived version of the LifeSiteNews article, writing: “IMPORTANT: An 82% miscarriage rate with pregnant mothers who get the jab, and they hide it! “This post garnered over 600 likes and 500 reposts. The archived version of the article also spread to a number of fringe sites, especially in communities pro-Trump and on 4chan. The claim was also circulated by the Infowars conspiracy theorist Alex jones on his show.

The misrepresentation of the NEJM study is just one of many ways that right-wing entities have tried to use manipulated data to create panic over the effects of the COVID-19 vaccine on pregnant people.

The New York Times reported in december 2020 about a retired British doctor who became known as an “unlikely hero of the so-called anti-vaccines” for spark a wave of distrust of the vaccine by speculating, without evidence, that it could cause infertility in women. In January, claims that a pregnant doctor miscarried after receiving the COVID vaccine were echoed by right-wing figures such as Infowars’ Paul Joseph Watson and broadcast on the right-hand Telegram channels. In April, claims that being close to a vaccinated person could cause a miscarriage or a change in their menstrual cycle also began to spread on social media. USA today demystified this conspiracy theory, noting that experts had called such a notion “pure fiction”.

These concocted stories about the impact of COVID vaccines on pregnant people have also started to gain traction internationally. In May, NBC News reported on a social media post from a butcher shop owner in Ontario who asked vaccinated people to order curbside in order to “protect” his customers. In March, a British company anti-vaccine exit, the Daily Expo, published an article titled “The number of women who lose their unborn child after receiving the Covid vaccine increases by 366% in just six weeks. In subsequent articles, the outlet alleged that this percentage continued to grow, with a 483% increase in miscarriages after seven weeks and one 2000% increase after 14 weeks. However, like several outlets – including Reuters – reported, these figures were savagely taken out of context, “without having mentioned the overall increase in the number of vaccines administered”, among other flaws.

Although the Center for Disease Control and Prevention (CDC) has recognized that more research needs to be done on the effects of the COVID-19 vaccine on pregnant women, much of the evidence and expert opinion available find that there is little cause for concern. Yet despite consistent debunking, the media and right-wing entities continue to spread anti-vaccine misinformation by ignoring or manipulating the opinions and data of experts.