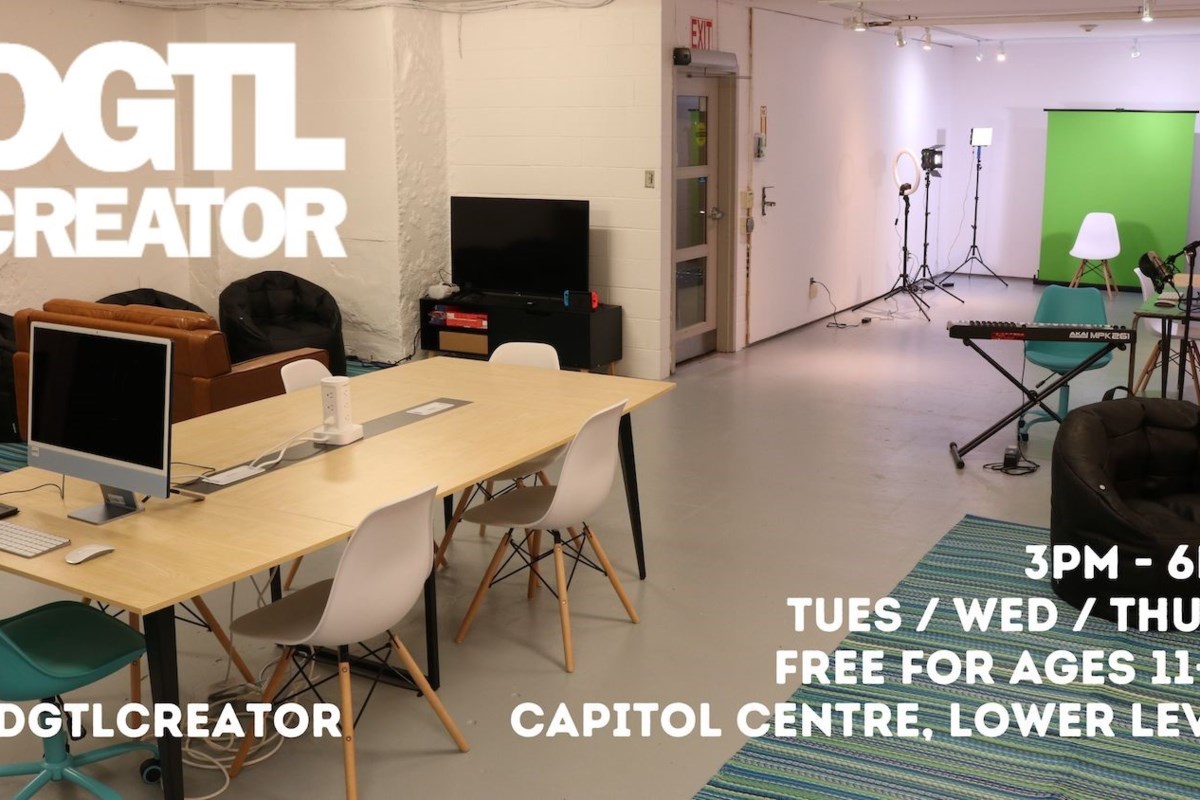 “They can participate in our digital music installation, they can learn about photography and video and we also have more formal workshops that happen a few times a month”

Rooted is about the people and places that make us proud to call our community home.

Giving children a space to explore their creative side of media is what the Near North Mobile Media Lab hoped to do by creating the Digital Creator North program.

Operating from seven different locations in Northern Ontario, headquartered in North Bay, the Near North Mobile Media Lab will unveil this program locally to the public with an open house on Saturday (November 12) from 11 a.m. at 1 p.m.

“Digital Creator North was opened, but there was no official launch and that’s what’s happening on Saturday. We’ve worked out all the issues and all the equipment and mentors are in place and we have a strong group of kids coming and participating, so we know we’re doing it well,” said co-executive director Sharon Switzer.

“Now we are delighted to open it to the public for our open house.”

Located on the lower level of the Capital Center, the Digital Creator North program is open to youth ages 11-19.

“We announce that we are open for children from 3 p.m. to 6 p.m. on Tuesday, Wednesday and Thursday. We have two mentor artists running the program and the kids can just sign up and do whatever they want in terms of their own creative projects,” says Switzer.

“We run workshops where they can also get one-on-one help from mentors. They can participate in our digital music setup, they can learn about photography and video and we also have more formal workshops that happen a few times a month.

Alexander Rondeau is also Co-Executive Director and says their mandate is to provide the tools and knowledge to work with different software and equipment that media and digital artists need to complete their projects in Northern Ontario.

He says, “We know that access to a lot of this stuff in the North is limited, so the media lab is looking to build on that.”

In 2016, the Media Lab launched six spaces where young people can hang out with full-time on-site staff members who are themselves artists who can teach a variety of media and digital skills to individuals.

He says that while programs in these areas are still on hiatus due to COVID-19, they have seen great successes coming out of these different locations.

“A recent example of how kids really use space is at our Sioux Lookout location. There was a group from Sandy Lake, which is a remote fly in the First Nations community, and they had to go to Sioux Lookout to attend high school. One of them got really into flirting, and they came to the Digital North Creator program after school and started making these videos of themselves interviewing themselves off flirt, using different camera angles and editing to sequence the interview to appear as two people instead of one,” says Rondeau.

“We held a big digital media industry conference in North Bay and part of that conference allowed this student to pitch his videos and they went on to win gigs as drag characters. So we see these real, tangible things happening for young people who otherwise weren’t there before.

This is not the only tangible proof that the film and digital media industry is an industry in which young people would benefit from acquiring skills.

“In North Bay we have an organization that does such a great job of advocacy called Creative Industries and they always point to data search this consistently shows that Ontario’s creative sector contributes more to GDP than other sectors such as agriculture, forestry and mining industries combined. So just seeing the film industry thrive in the North speaks volumes,” says Rondeau.

Rondeau adds, “We really want young people to make the decisions and tell us what they need. For those young people who are media consumers, we want them to also become media producers.

Switzer says, “One of the things we’ve done in the past is when a student has an idea for a bigger project, we really open up the space for them. Although students cannot take equipment offsite, we have the capacity for them to be in this space. »

Switzer says there are lots of different things students can do in this space.

“Every type of group of people that passes seems to be different. What I hear from our program leaders is that the kids love being on the iPads and working on digital drawings,” she says.

“They also like the music stations installed where they learn to record and create their own music. It’s really exciting for them. We have a daughter who is a recent immigrant from Ukraine and she comes over every day just to have a place to relax and be creative in her own way. We found that what was most valuable to children was just having their own space, their own clubhouse where they could figure things out on their own and learn at home and feel safe while by doing it.

Digital Creator North is just one of the projects undertaken by the Near North Mobile Media Lab.

“We have a lot of programs we’re running right now,” says Switzer.

“Every two years there is Ice Follies, a major contemporary art event that takes place directly on frozen Lake Nipissing. It is run by three organizations, but we are taking on an important administrative role in this event,” she says.

There is also the next North Bay Film Festival which takes place in November and which will take place again this year from November 25th to 27th.

“This is the seventh year of the Film Festival as we know it now,” says Switzer.

“There have been a lot of dedicated volunteers over the years to make this happen through various iterations. The Media Lab officially manages it, but we don’t manage it alone. It takes a lot of people and it’s a very fun event. We’re thrilled to be back in person this year after a few years of doing it virtually, and we can celebrate cinema and bring an incredible slate of movies to North Bay that otherwise wouldn’t come here.

Rondeau says, “Having them on screen at the Capital Center is a great part of it all, too. The event itself feels like a love letter to North Bay.

If you have a story idea for the “Rooted” series, email Matt at [email protected]