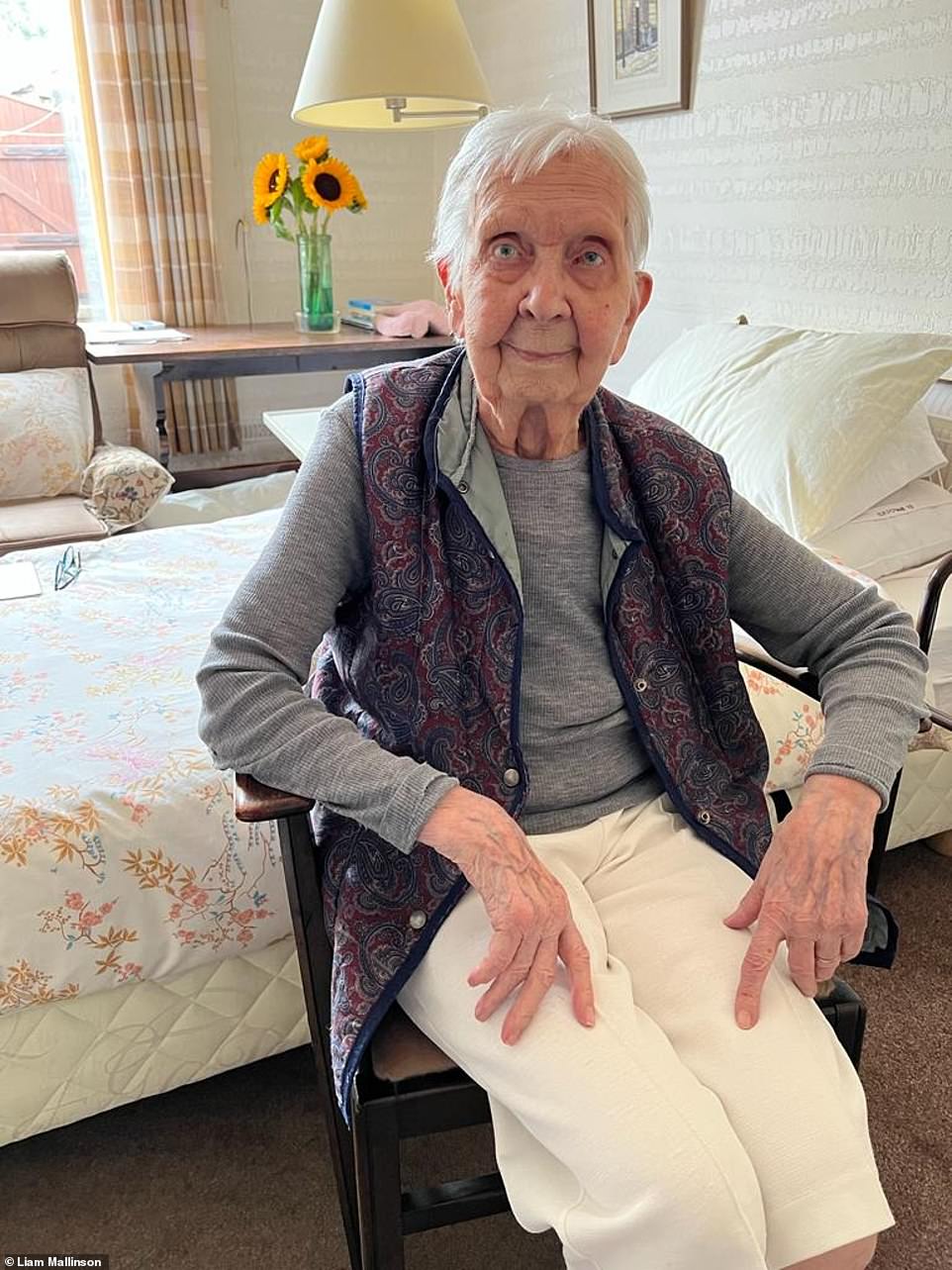 A “wonderful” plaque campaign honoring seniors and their remarkable contributions to the community has been hailed by the public.

The campaign saw purple plaques installed alongside famous blue plaques of British icons so that everyday British heroes could be seen alongside them.

The Purple Plaque Campaign said it wanted to help people recognize the importance and achievements of older people in their community – often ‘overlooked and undervalued’.

Local heroes across the UK are being honored by the campaign – including a woman who helped break the riddle code, an RAF pilot who was shot down and escaped behind enemy lines during World War II and a volunteer who taught literacy and numeracy in prisons.

Doreen Brooks, 101, received a purple plaque to mark her contribution to breaking the enigma code during World War II 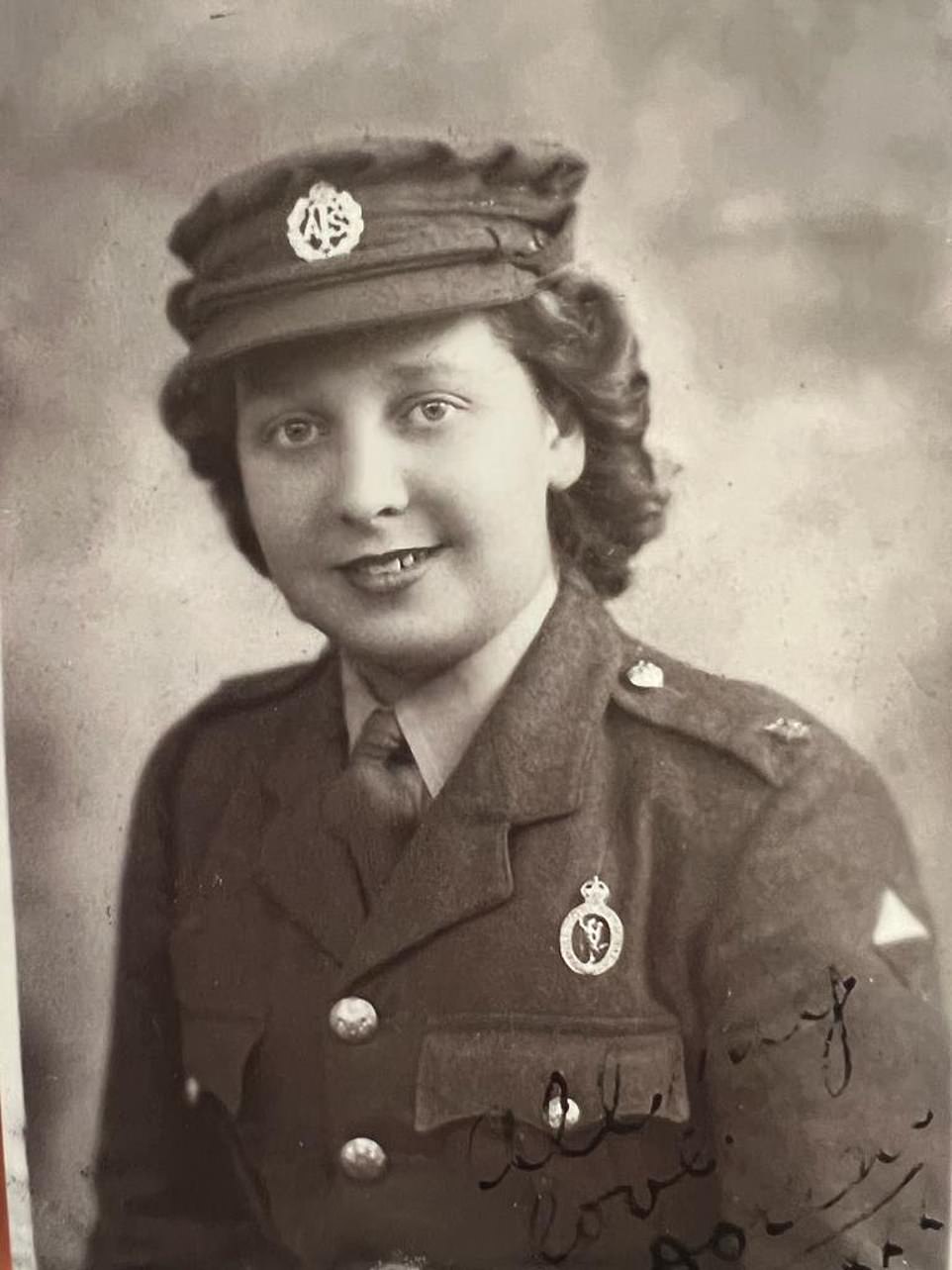 Doreen (pictured aged 23 during World War II) was in the Royal Corps of Signals as a special wireless operator, intercepting messages coded into German riddles, recording them and sending them to Bletchley Park 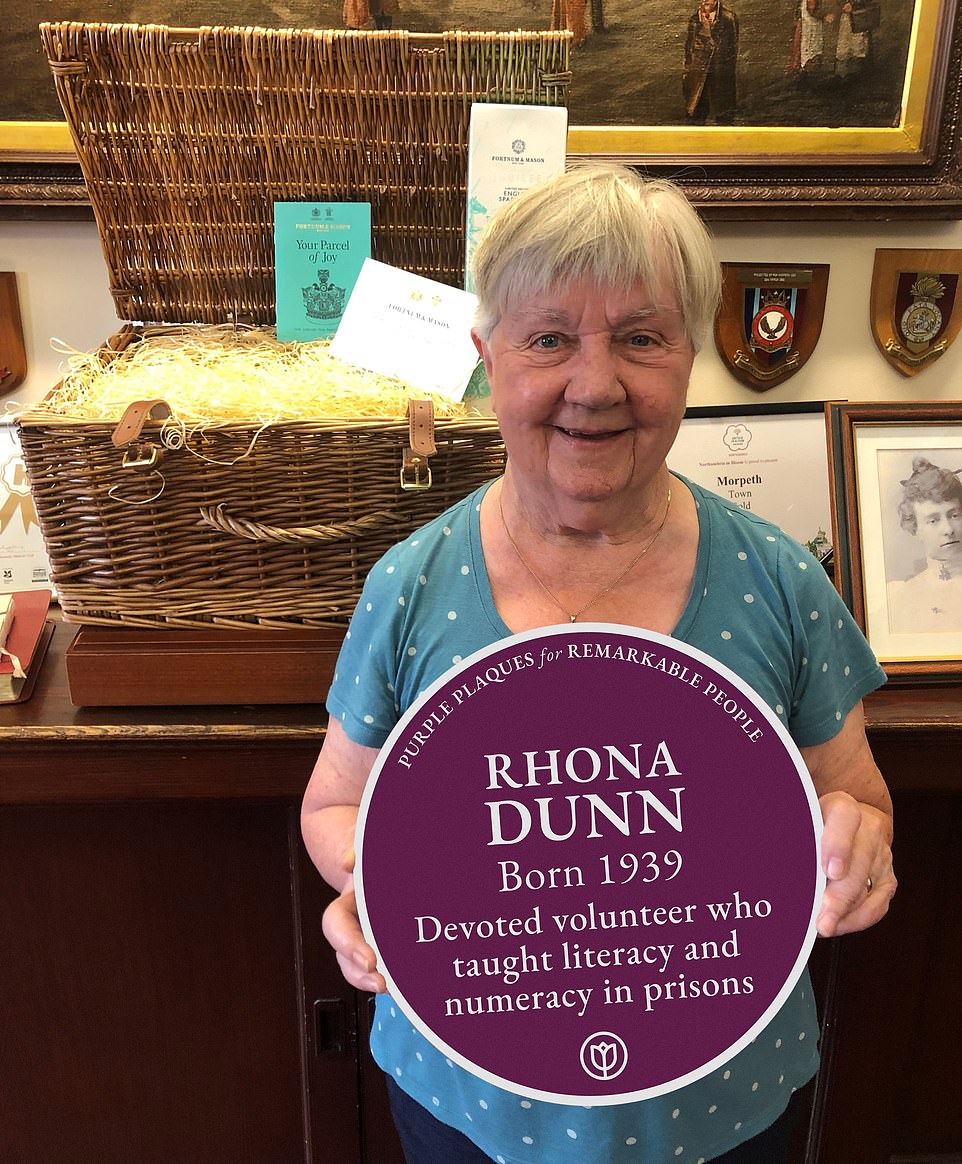 Rhona Dunn, 82, a lifelong volunteer and charity worker, received a plaque for her charity work and her teaching of numeracy and literacy in prisons, along with a gift basket to go with it. 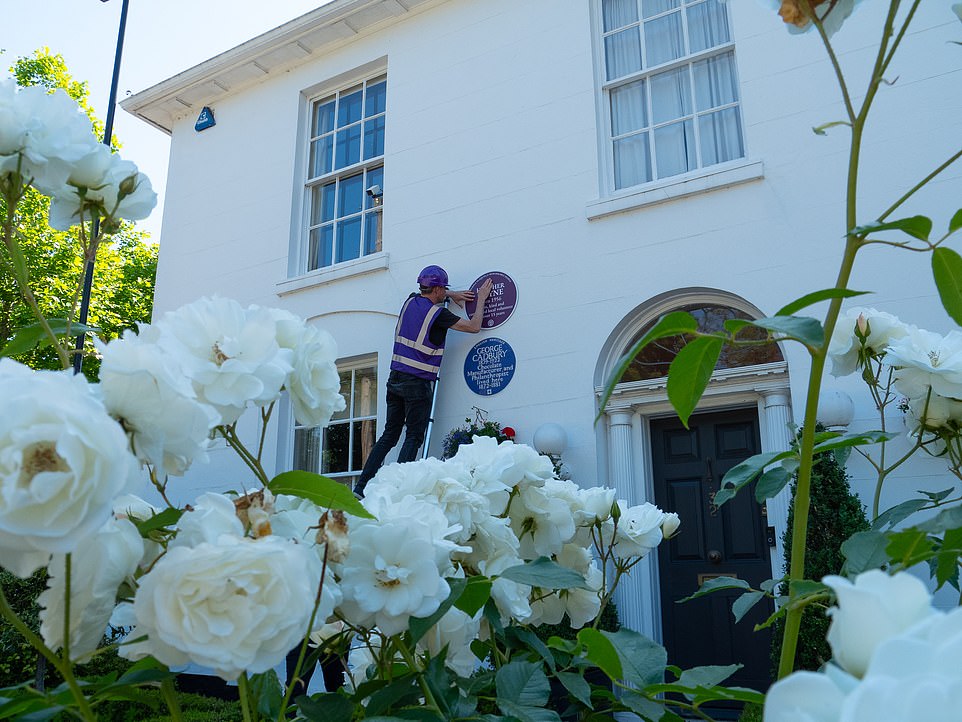 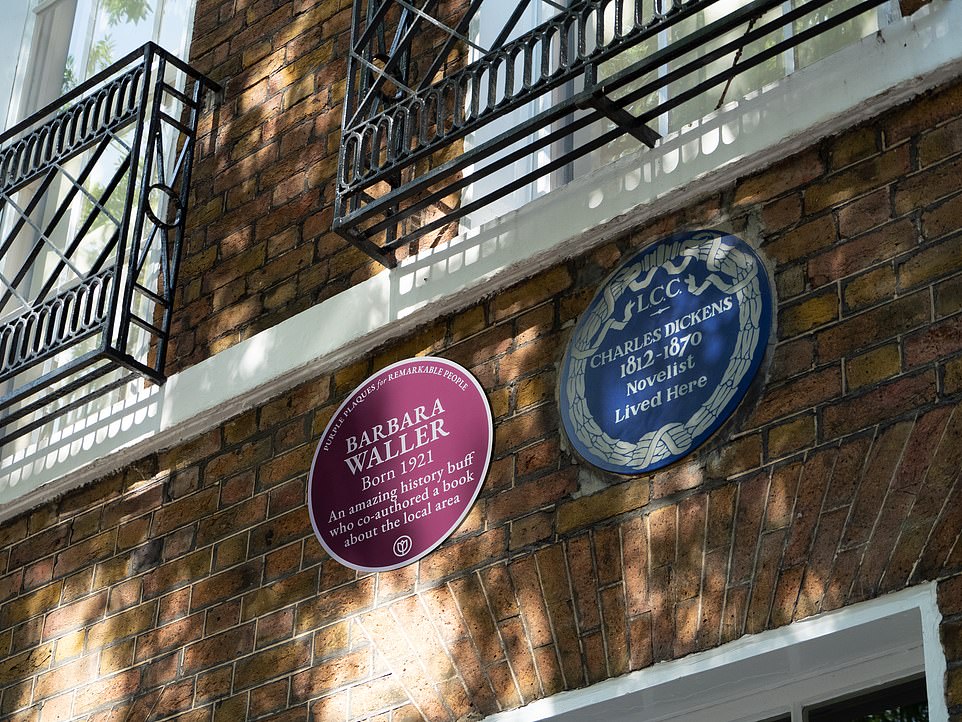 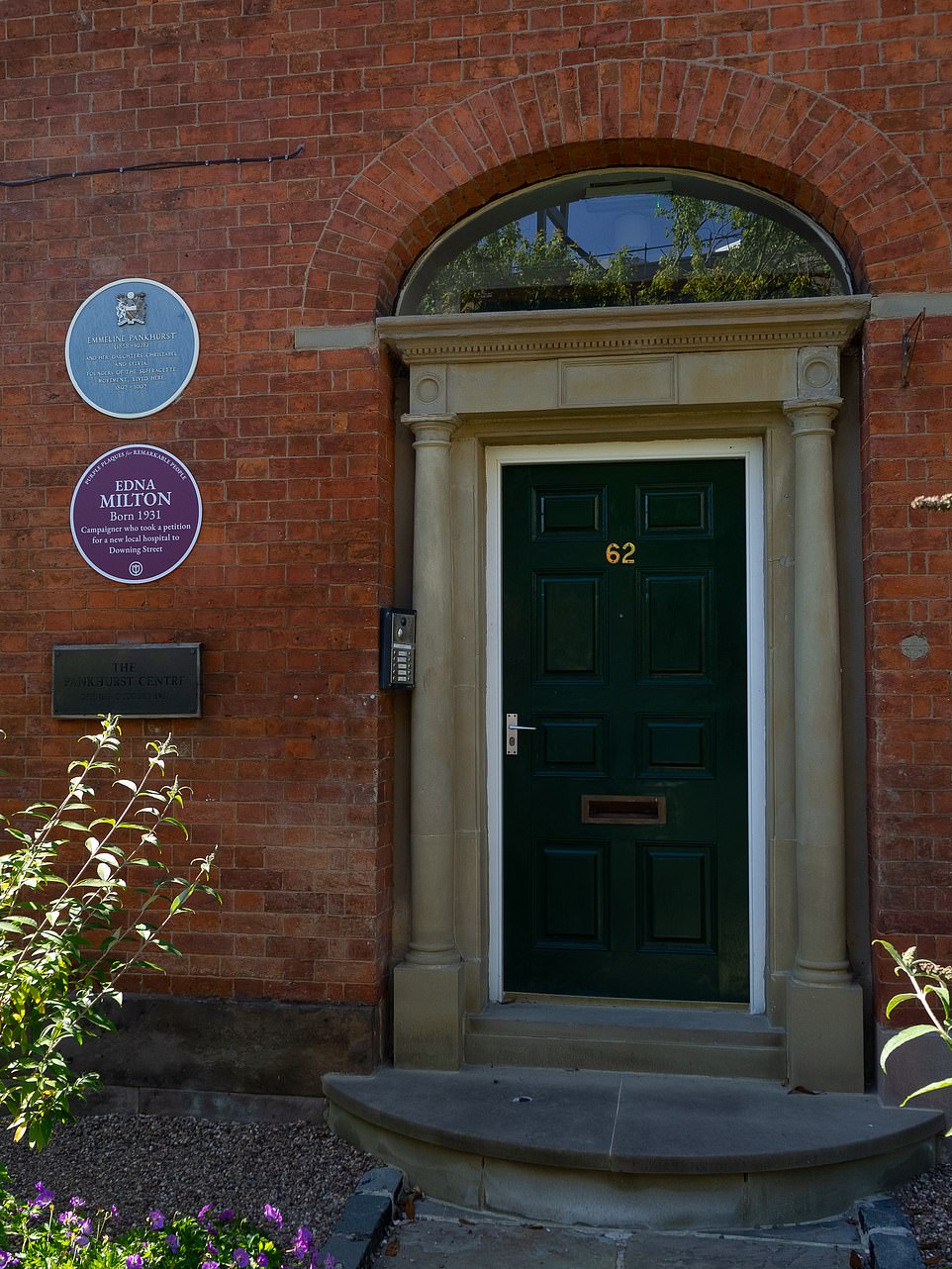 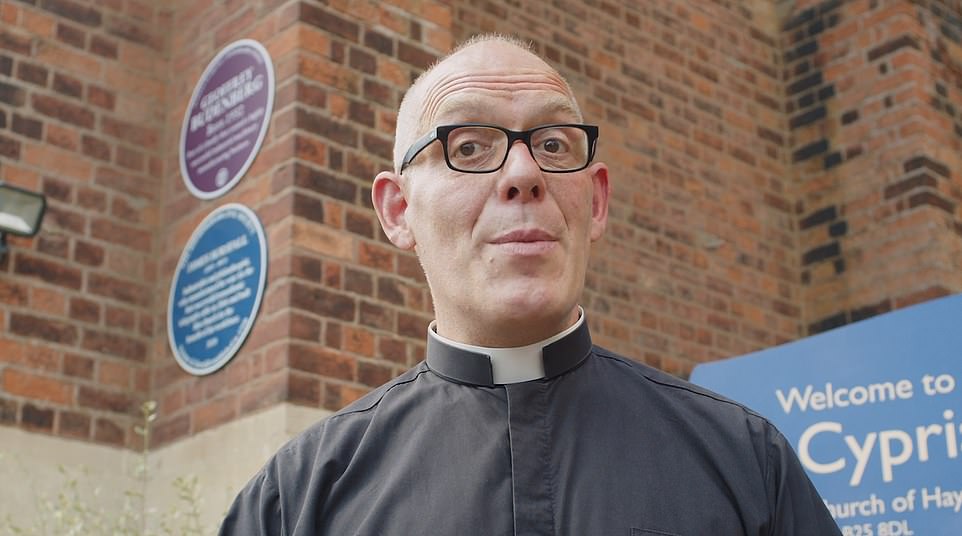 Reverend Alex French said celebrating “the uniqueness of people and the contributions they make, whether big or small, known or unknown, is really important”. 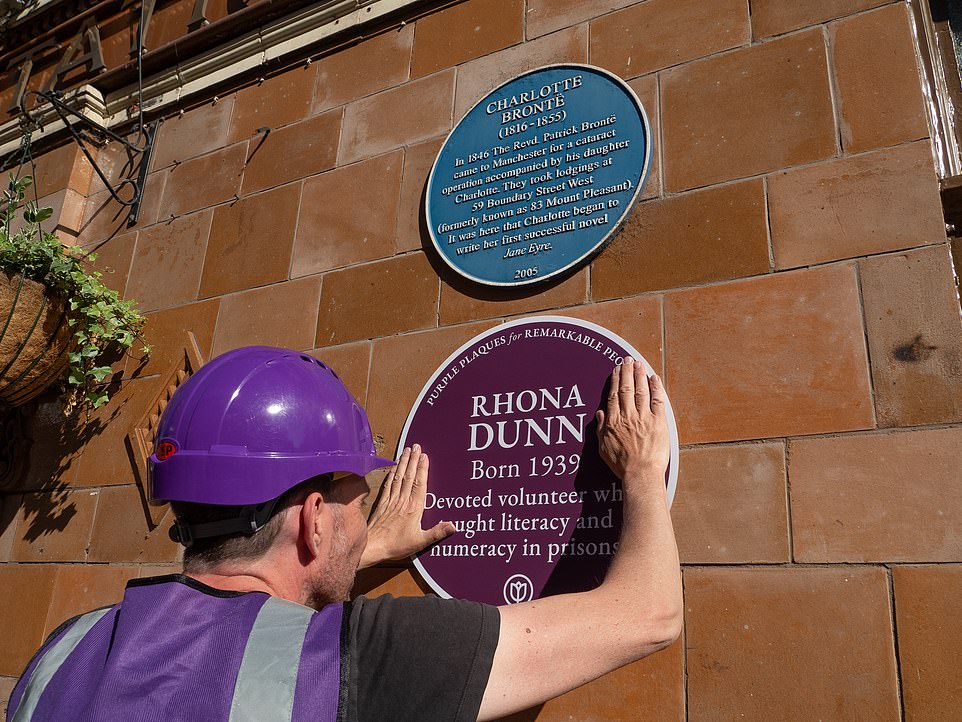 Rhona Dunn’s plaque has been affixed to the wall of The Salvation pub in Manchester, alongside author Charlotte Brontë’s blue plaque

The new plaques, created by home care company Home Place, have been temporarily installed alongside plaques of Britons such as Charlotte Brontë, Charles Dickens and Emmeline Pankhurst.

Campaigners who organized the purple plaques for notable people said they wanted to help end ageism in the UK and show their appreciation for older people.

One of the notable people celebrated in a purple plaque is Doreen Brooks, who turned 101 in July.

Doreen was part of the WWII mystery team that intercepted the German messages, recorded them, and sent them to Bletchley Park where they were decoded. At the time, she had no idea how important their work was.

Doreen said: ‘We didn’t know what they were. We didn’t even know they were German. They didn’t tell us because it was so quiet.

“They said don’t tell anyone – not your parents, brothers, sisters. My husband didn’t even know about it until 2009 when it was made public.

The code breakers’ top secret work was finally acknowledged in 2009 and Doreen received a letter of thanks from then Prime Minister Gordon Brown.

Now once again being honored for her work, Noreen said she was surprised to hear about the purple plaque.

She said, ‘Why me? I am not an MP or someone famous.

Another unsung hero celebrated with a purple plaque is Rhona Dunn, 82, who has been involved in community and charity work throughout her life.

Rhona worked as a high school teacher before joining the Prison Service, where she taught numeracy and literacy to prisoners, earning her a plaque outside The Salutation pub in Manchester.

She has also volunteered for a mental health charity for decades, worked for subsidized food banks and helped those affected by flooding in her home town of Morpeth, Northumberland.

Rhona said: “All my life I’ve been a volunteer in one way or another…I’ve always been for charity

‘Your age has nothing to do with it.

‘Sometimes someone will say to me “How do you find all these people to help you?” If you go out, you can find someone to help you… There will always be people who need help.

Rhona added that she was thrilled to have received the purple plaque, saying, “I’m thrilled and the basket was good too!” The plate is in the spotlight right now.

The new program was warmly welcomed by members of the public, who agreed it was a great idea to show extra appreciation for the seniors in their area.

Jackie Knight told the campaign: “I think it’s wonderful that everyday heroes are being celebrated. I think it was time.

Reverend Alex French added: “I certainly think having that recognition, and understanding and knowing the uniqueness of people and the contributions they make, whether big or small, known or unknown, is really important. .”

Sandy Robertson told the Purple Plaque campaign: “No one is ordinary – older people have a lot of stories to tell, and people who don’t think they have stories to tell actually do and they can be really fascinating .”

Lee Chapman, Chief Brand and Marketing Officer of Home Rather, said: “With more seniors over the age of 65 than ever before, we need to rethink how we value the seniors’ experience and the contribution that people make. they bring.

“This campaign aims to highlight the issues of ageism that we have in this country. And it became very evident, as we traveled around the UK putting up our purple plaques, that many people in Britain believe that more needs to be done to counter age prejudice and recognize that people older people bring so much to us as a society.

“Home Platform believes that quality of life has no expiration date and that people of all ages deserve comfort, connection and dignity. And we firmly believe that the famous names we use to highlight this issue would support what we do and applaud the idea of ​​standing up for the country’s unsung heroes.

People honored by the Purple Plaque campaign include: