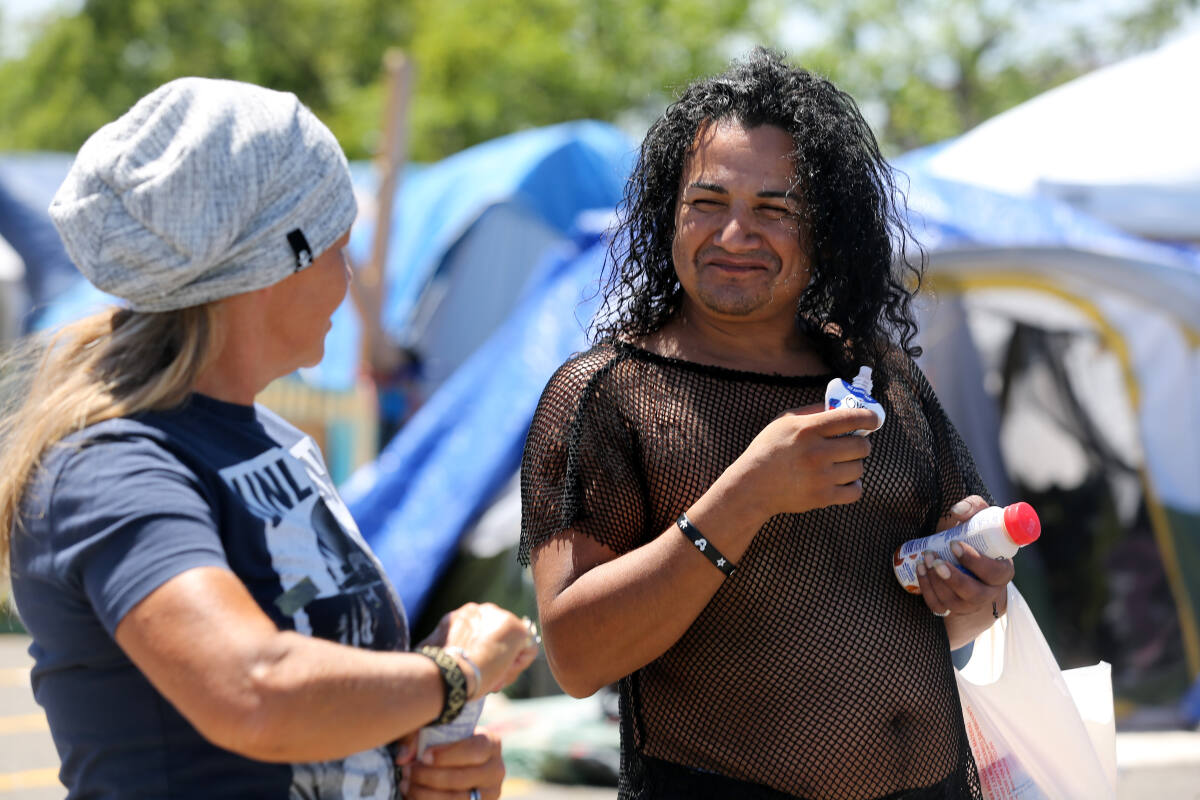 Brian Kein stood guard outside a friend’s tent at a city-sanctioned homeless encampment off Highway 101 in Rohnert Park. Kein’s friend was shopping at a thrift store, and leaving the man’s things unattended for even a few minutes would have been a risk.

Living on the streets for eight years, Kein, 52, has a habit of constantly looking over his shoulder. He appreciates the city allowing him to move into the fenced-in commuter parking lot on Roberts Lake Road. But he said he was tired of the ‘criminal thinking’ that has overtaken the encampment as it has grown to about 100 tents since city officials first invited homeless residents there this winter. .

In recent years, local governments in Sonoma County and the Bay Area have turned to managed tent camps and “secure parking” programs as alternatives to overcrowded emergency shelters.

But unlike most of these sites, the Rohnert Park camp is not run by a nonprofit homeless-serving organization. The city pays for trash pickup and portable toilets, and outreach workers check in weekly as part of their citywide efforts.

Some homeless residents and owners of neighboring businesses say they are worried about their safety.

“With this encampment there, there is an increase in criminal activity,” said Department of Public Safety chief Tim Mattos. “There’s no other way to put it.”

The encampment took shape this spring, after city officials in February moved about 30 homeless people from an unauthorized camp on Roberts Lake Road to nearby suburban land. The fear was that someone would get hurt camping on the raised sidewalk alongside the roadway.

“It was an alternative to very dangerous conditions, where we literally feared someone would die if they weren’t moved,” said Jenna Garcia, housing administrator for Rohnert Park.

In the months that followed, the encampment grew from around 20 tents to around 100, with residents setting up several shelters in numbered sites marked with white lines painted on the sidewalk.

Anyone who wants to move into the camp is always welcome, and outreach teams with the nonprofit Catholic Charities of Santa Rosa make site visits a few times a week to connect residents with needed care and support. help find accommodation. The cost of outreach is covered by Rohnert Park’s ongoing contract with Catholic Charities for homeless services, city officials said.

The city provides garbage pickup, portable toilets and hand-washing stations, which are paid for under its existing contract with Recology, the city’s waste hauler. Rohnert Park also spends about $6,000 to $8,000 to remove hazardous materials from the camp once a week.

City officials said they don’t have the funds to hire a private security service or non-profit organization to help run the site, which they say could cost up to $1 million. dollars per year.

They describe the encampment as a temporary effort to provide shelter for some of Rohnert Park’s roughly 250 homeless residents while the city works on more permanent solutions – including 60-unit supportive housing that started this month. -this.

“(Homelessness) is an accumulation of years of what happened, but now we are moving in the right direction,” said Rohnert Park Mayor Jackie Elward.

Elward said there was no timeline for closing the encampment, which appears to be the largest known cluster of homeless residents in the county. Overall, the county has nearly 2,900 homeless people, a 5% increase since just before the pandemic began, according to new data released last month.

Cully Williamson, owner of Mary’s Pizza Shack at nearby Rogers Plaza Mall, said city officials have largely ignored her complaints about security and vandalism since the encampment opened. His main concern is a camp resident who appears to have mental health issues and is often aggressive towards his employees, Williamson said.

“It’s just frustrating – (the city) is not really doing anything to protect my business, my customers and my staff,” he said.

City officials said they have remained in communication with local business owners and plan to hold a public discussion about the encampment at the June 28 city council meeting.

From Jan. 1 to May 31, police received 146 calls about the camp, including four calls for potential assaults and seven for possible burglaries or thefts, according to police data. A report of a potential shooting at the encampment in March later turned out to be a flare-up, police said.