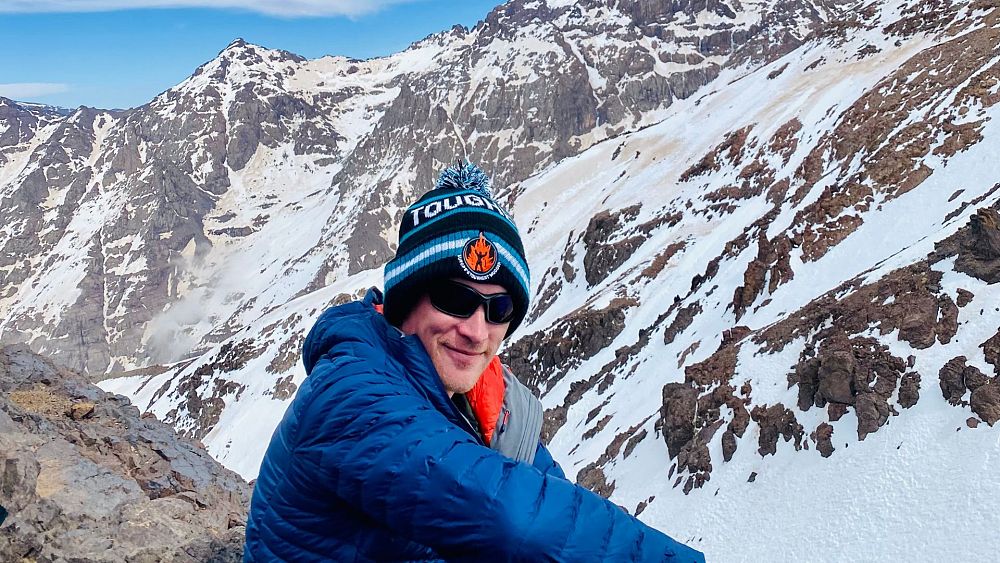 This Briton was diagnosed with a brain tumor in 2018. Today he is climbing the highest peak in North Africa

Climbing a 4,000 meter mountain is no small feat.

But for intrepid adventurer Matt Carpenter, it’s more than just a challenge. It’s a chance to prove that brain damage can’t stop him and raise money for the charity that helped save his life.

Hikers ascend the most majestic peak of the rugged Atlas mountain range, culminating at 4,167 meters above sea level.

“It’s basically to show other people on the same journey as mine that mountain-sized challenges are achievable,” says Matt.

“A brain injury can make the world small. But the world is huge.

Matt raises money for PAUL for Brain Recovery, a UK charity that provides support, advice and education to people affected by acquired brain injury. Alongside the trek, he also ran his very first half-marathon. On top of all that, for every £10 raised, he’ll take a cream pie in the face.

It’s “great” to give back, he says. But the road has been long for Mount Toubkal.

In 2010 Matt was admitted to hospital after suffering a concussion – but a routine scan gave a ‘quite clear’ result.

For eight years, the Hull local lived a normal and full life. He has regularly raised funds for charityworked at a job he loved at a homeless shelter and fathered two children.

But in 2018, he was hit by a sudden crisis at work. After doctors ordered another CT scan, they discovered a tumor.

The malignant mass is visible on Matt’s 2010 scan, barely the size of a marble – but the doctors missed it. By the time the tumor was discovered, it had grown to the size of a “Cadbury’s cream egg”, Matt recalls.

“It stuck with me for six years…it had been there all along,” he says.

“I thought there was something in my brain that was getting bigger and bigger.”

After emergency neurosurgery, Matt got back into fundraising. Against the advice of his doctors, he performed a brutal Hard mud obstacle course and a 10 km charity race.

Looking back, he admits he was in denial about his medical prognosis. But the tumor came back – and he was forced to accept that he needed help.

Despite a grueling course of chemotherapy and radiotherapy, Matt still managed to complete the Yorkshire Three Peaks Challenge and win Scaffell Pike, the highest in England. Mountain.

The relentless hospitalizations “beat” his sanity – but the chemo seemed to work.

“So far it looks like the little sucker is gone – dead,” he said.

“There are probably traces of it somewhere in my brain, but for the most part it’s gone.”

Matt has always loved travel. Before learning about his brain tumour, he made regular trips abroad, including stays volunteering in a baboon rehabilitation center in South Africa.

But since her diagnosis, it’s more than a diversion — it’s a way to live life to the fullest.

“There is a quote that I like to live. It’s “people say you only live once”. For me it sucks. It’s that you only die once – you live every day,” he says.

“I want to make the most of today, instead of worrying about tomorrow or yesterday.”

At the same time, he insists on the importance of not “push yourself too hard.”

Everyone’s journey with a brain injury is different and everyone will be physically capable of different things.

“Brain injury is a journey, not a sprint,” he says. “Take it steady, there is absolutely no urgency.”

Matt found out the hard way. The young adventurer first attempted the Mount Toubkal trek – run by a travel agency Much better adventures – in June. But altitude sickness forces him to turn back just before reaching the Mountain peak.

“I could start to feel dizzy. I wanted to continue but I didn’t want to pass out and the team agreed,” he said.

“It sucked. But if you push yourself too hard, you can put your health at risk. I try not to do that anymore.

Matt has raised over £700 of his £1000 fundraising goal – you can find the link to his fundraising page here. He also published a book: A Trip Down the Rabbit Hole: My 10 Year Journey with a Brain Tumour.

The Mount Toukbal challenge is mainly about raise funds for charity. But it will also be personally cathartic, says Matt.

“This time the idea is to get to the top and scream fucking brain tumor!” he’s laughing.

“Yeah, I think that’ll do some good.”